MENTOR, Ohio – June 3, 2019 – Avery Dennison Graphics Solutions has announced the opening of its annual Wrap Like A King Challenge. This year’s vehicle wrap competition will run June 3 through Aug. 30, 2019, and it will again include Regional Wrap Kings, Continental Wrap Kings and the crowning of the prestigious “King of the Wrap World.”
Wrap installers from 50 countries across the world are invited to submit commercial, full print or color change wrap projects to be judged for the chance to win thousands of dollars in prizes. The prize packages for 2019 are worth a combined total of over $30,000, available to Regional Wrap Kings, Continent Wrap Kings and the “King of the Wrap World.” In 2018, more than 200 installers entered the challenge.
“We’ve been expanding the Wrap Like A King Challenge to new regions across the globe over the past two years, with the newest addition of South Africa for this year’s competition. We’re also introducing the ‘People’s Choice Award’ which allows the public to vote for their favorite project. This new award will provide additional and well-deserved recognition for our valued customers,” said Bill Podojil, vice president, Graphics Solutions North America. “We’re astonished at the level of creativity and talent with each passing year, and we anticipate the submissions for the 2019 challenge to surpass our expectations.”
Participating nations make up 13 geographic regions across the United States, Canada, Europe, Australia, New Zealand, Japan, South Korea and South Africa. Wrap installers in these regions will submit projects featuring Avery Dennison Supreme Wrapping™ Film, the Conform Chrome series, the ColorFlow™ Series, MPI 1105 Supercast Digital film or a combination of car wrap films to be evaluated against their regional peers by a panel of judges.
The 10 Regional Wrap Kings will win nearly $2,000 worth of personalized marketing materials, Avery Dennison product, SEMA passes and more. They will then go on to battle for royalty on their continents: North America, Europe, North Asia and Australia/New Zealand. The overall
winner will be chosen by the judges as the best in show and crowned the “King of the Wrap World” at the 2019 SEMA Show, Nov. 5-8 in Las Vegas, Nevada.
Industry experts from around the globe will use their wealth of experience to narrow down the field, picking the most beautiful, technically challenging or otherwise most impressive wraps to move on in each round of the Challenge.
The 2019 Judges Panel:
● Justin Pate – The Wrap Institute, Global Pate is an Avery Dennison-certified installer/instructor in the United States with over 20 years of experience. He leads the Avery Dennison North America hands-on car wrap workshop and certification program and is co-owner of The Wrap Institute.
● Myles Kovacs – DUB® Magazine, USA Kovacs is the president and co-founder of DUB® Magazine, a U.S.-based magazine that focuses on the urban custom car culture and celebrities and their vehicles. He has been in the auto industry for 25 years.
● Yianni Charalambous – Yiannimize, UK Charalambous is the owner of Yiannimize, a wrap shop in London catering to celebrities and high-end clientele. He has an incredible social following, with more than 1.3 million YouTube subscribers.
● Eddy Speelman – Speelman Graphic Applications, Europe Speelman is the owner of Speelman Graphic Applications and has been an Avery Dennison trainer for 15 years. He has been part of the wrapping industry for decades, and he specializes in color change applications, paint protection and window tinting.
● Molly Waters – Avery Dennison Graphics Solutions, North America Waters is a senior technical specialist in North America with over 19 years of industry experience. She often travels all over the country visiting sign and wrap shops and talking with customers about the car wrap industry. She also frequently contributes to the Avery Dennison blog.
● Peter Wright – Avery Dennison Graphics Solutions, Australia/New Zealand Wright is a technical marketing manager and works with the ’industry’s leading installers, teaching vehicle wrapping workshops and promoting the industry. With strong expertise in leading vehicle wrapping workshops, he has trained more than 2,000 people from Australia, New Zealand and ASEAN countries.
● Sarel Krüger – Avery Dennison Graphics Solutions, South Africa Krüger joined the Avery team in 2011 after working in the signage industry for nearly 10 years. His experience ranges from equipment and software, to the manufacturing of signage and graphics, vehicle wrapping and, ultimately, the supplying of material.
● Frank Marquart – Avery Dennison Graphics Solutions, Europe Marquart is a technical marketing manager, digital print media, in Europe and actively participates in product development and relationship management with printer OEMs.
● Jun Kinoshita – Avery Dennison Graphics Solutions, Japan
Kinoshita is the sales manager for Avery Dennison Graphics Solutions in Japan. He introduced the Certified Wrap Installers training program to Japan and worked together with Justin Pate on the training course.
The five continent winners will receive a four-night stay in Las Vegas for the 2019 SEMA Show, where the “King of the Wrap World” will be announced. The $3,200 prize pack for continent winners also includes personalized Wrap Like A King t-shirt, $500 in gift vouchers and a variety of promotional and marketing tools for the winner’s wrap shop. The “King of the Wrap World” grand prize package is worth almost $5,000, with additional gift vouchers and exposure via the Avery Dennison website and web advertisements.
Car wrap installers are encouraged to enter a vehicle wrap project using Avery Dennison Supreme Wrapping™ Film or digital cast films online at wraplikeaking.com. Official rules, judge bios and prize information are also posted on the site.
For more information on Avery Dennison vinyl for car graphics and where to buy Supreme Wrapping Film, visit graphics.averydennison.com. Join the conversation on Avery Dennison Graphics Solutions’ social 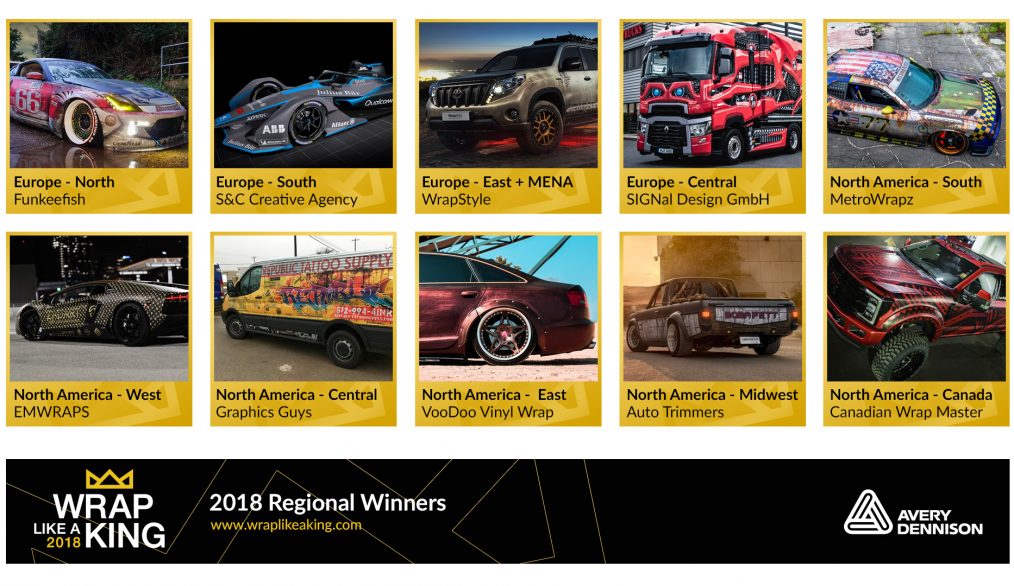 “Having the responsibility of picking the finest wraps in the world is an exciting task as a judge in this challenge,” said Molly Waters, senior technical specialist, Avery Dennison Graphics Solutions. “Each year we wonder how Wrap Like A King entries could be more ambitious, and every time, installers find a way to surprise us with new techniques and film combinations.”

The eight professional judges evaluated the submissions based on the following criteria: visual transformation (difference between the before and after pictures submitted), quality and skill level of installation, overall public look and appeal and uniqueness of the design.

“We continue to build a full lineup of automotive restyling solutions, and the creative entries from Wrap Like A King™ show what our talented customers can accomplish with them,” said Jeff Losch, marketing director, Avery Dennison Graphics Solutions. “These Regional Wrap Kings have each made something incredibly unique, and we are proud that our products were the starting point.”

“I’m really proud to take home a regional crown for the third year in a row, especially with the way installers have raised the bar every single year,” said Kevin Kempf, owner of PG NOLA. “If I’m able to bring the title of Continent Winner and King of the Wrap World back to my shop against this incredible field, it will be a truly special achievement.”

“I’ve been honored to be one of the judges for the Wrap Like a King Contest since it began and, without a question, this year was the hardest to choose a regional winner. There are so many unique and out of the box wraps that push car wraps to new levels,” said Justin Pate, world-renowned vehicle wrap installer. “I can’t imagine how hard it will be to cast my vote for the winner. It’s super exciting to be part of this.”

“For our fifth year of the Challenge, we were blown away by the planning and technique that went into creating each of the region-winning vehicle wraps,” says Jeff Losch, North America marketing director at Avery Dennison Graphics Solutions. “All of the entries are a great reminder of the dedication and creativity of wrap installers around the globe. The judges will have a difficult decision picking the overall king.”

Each Regional Wrap King won an initial prize package valued at close to $2,000. The prize pack includes passes to the SEMA show, a Regional Wrap King trophy and, a large banner stand display, two free rolls of Supreme Wrapping Film and social media exposure. The $3,200 prize pack for continent winners includes personalized Wrap Like a King swag, $500 in gift vouchers, a 67” Race Ramp and a variety of promotional and marketing tools for the winner’s wrap shop.

The eight professional judges evaluated the 159 total submissions based on the following criteria: visual transformation (difference between the before and after pictures submitted), quality and skill level of installation, overall public look and appeal and uniqueness of the design.